((DISCONTINUED BY MANUFACTURER))
An exciting new Neurogenesis enhancer which plays an important role in reversing neurodegeneration, boosting mood, and enhancing cognition. It helps to support the survival of existing neurons, and encourage the grow 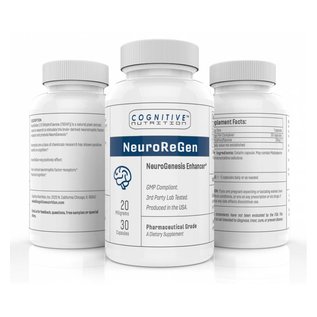 It has been found to act as a potent  agonist (stimulator) of the BDNF receptor. BDNF plays an important role in reversing neurodegeneration, boosting mood, and enhancing cognition. BDNF is a  NeuroTropic Factor. Neurotropic Factors maintain the self repair and regeneration system of the brain and nervous system.*

BDNF acts on certain neurons of the central nervous system and the peripheral nervous system, helping to support the survival of existing neurons, and encourage the growth and differentiation of new neurons and synapses. In the brain, it is active in the hippocampus, cortex, and basal forebrain—areas vital to learning, memory, and higher thinking. It also enhances synaptogenesis vital for learning from new experiences. Synaptogenesis is dependent upon the assembly of new synapses and the disassembly of old synapses.*

NeuroReGen is orally bioavailable, able to penetrate the blood–brain barrier, may help support mood and cognition, and has been shown to be safe for long term use in some research.*

As a dietary supplement, take 1 up to 5 capsules daily.

Material is pharmaceutical grade at no less than 98% pure. Labs tested for quality. Negative on any unsafe levels of microorganisms, such as, bacteria, mold, or fungi, as well as, within safely limits of a panel of heavy metal tests. Produced in a cGMP registered plant following strict FDA guidelines under the DSHEA act for producing detailed and extensive work to meet these exacting quality standards.

*These statements have not been evaluated by the Food and Drug Administration. This product is not intended to diagnose, treat, cure or prevent any disease.